Sting and Branford Marsalis: “If You Love Somebody, Set Them Free”

Interestingly, the essay begins with the story of how Macarena Gomez-Barris fell in love with Judith Halberstam, but the full import of the text performs a recognizable “homonormalizing” permutation of heteronormativity that provides a compelling example of what Puar describes as “U.S. sexual exceptionalism.” Quote:

I Stop Writing the Poem

to fold the clothes. No matter who lives
or who dies, I’m still a woman.
I’ll always have plenty to do.
I bring the arms of his shirt
together. Nothing can stop
our tenderness. I’ll get back
to the poem. I’ll get back to being
a woman. But for now
there’s a shirt, a giant shirt
in my hands, and somewhere a small girl
standing next to her mother
watching to see how it’s done. 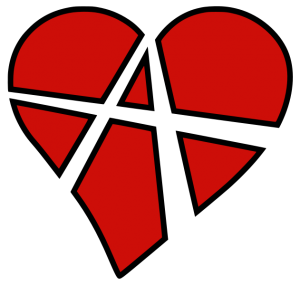 The symbol for Relationship Anarchy (RA, sometimes known as “Radical Relations”) was created by the Swedish radical art collective “Interacting Arts” in 2006 as a symbol for those who reject normative ideas of how relationships “should” be organized.

I came across this website today and thought it was pertinent to our continuing dialogue about “queer identities” with “no fixed referent.”

“Ferron’s songs have always been about time passing, about her place in time, her sense of her career in music as ‘moving forward by holding back.” I want to end with a closer look at one of her most famous songs, ‘Shadows on a Dime,’ to track the performances and performers who lie somewhere in between the ‘then’ of historical time and the ‘now’ of performance, the temporal drag and lag that allows some pieces of history to simply fall away and remain lost to narrative. Ferron represents what can be lost even for white lesbians in the relentless urge to universalize white lesbian culture and represent it as historically continuous” (183).